P.T.S.D. and Cannabis’ Mechanism of Action 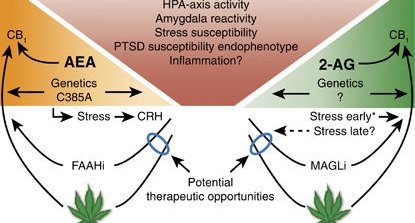 One often intractable problem for which cannabis provides relief is post-traumatic stress disorder (PTSD). Certified Cannabinoid Medicine Specialist, Dr David Bearman, has more than 100 patients with PTSD. Among those reporting that cannabis alleviates their PTSD symptoms are veterans of the war in Vietnam, the first Gulf War and the current US occupation of Iraq. Similar benefit is reported by victims of family violence, rape and other traumatic events, along with children raised in dysfunctional families. Post-Traumatic Stress Disorder —once referred to as “shell shock” or “battle fatigue” — is a debilitating condition that follows exposure to ongoing emotional trauma or in some instances a single terrifying event. Many of those exposed to such experiences suffer from PTSD. The symptoms include persistent frightening thoughts with memories of the ordeal and frightening nightmares, often feeling angry and in emotional isolation.

Sadly, PTSD is a common problem. Each year millions of people around the world are affected by serious emotional trauma. In more than 100 countries there is recurring violence based on ethnicity, culture, religion or political orientation. Men, women and children suffer from hidden sexual and physical abuse. The trauma of molestation can cause PTSD. So can rape, kidnapping, serious accidents such as car or train wrecks, natural disasters such as floods or earthquakes, violent attacks such as mugging, torture, or being held captive. The event that triggers PTSD may be something that threatened the person’s life or jeopardised someone close to him or her. Or it could simply be witnessing acts of violence, such as a mass destruction or massacre. PTSD can affect survivors, witnesses and relief workers. Whatever the source of the problem, PTSD patients continually relive the traumatic experience in the form of nightmares and disturbing recollections.

They are hyper-alert. They may experience sleep problems, depression, feelings of emotional detachment or numbness, and may be be easily aroused or startled. They may lose interest in things they used to enjoy and have trouble feeling affectionate. They may feel irritable, be violent, or be more aggressive than before the traumatic exposure. Seeing things that remind them of the incident(s) may be very distressing, which could lead them to avoid certain places or situations that bring back those memories. Anniversaries of a traumatic event are often difficult. Ordinary events can serve as reminders of the trauma and trigger flashbacks or intrusive images. Movies about war or TV footage of the Iraqi war can be triggers. People with PTSD may respond disproportionately to more or less normal stimuli — a car backfiring, a person walking behind them. A flashback may make the person lose touch with reality and re-enact the event for a period of seconds, hours or, rarely, days. A person having a flashback in the form of images, sounds, smells, or feelings experiences the emotions of the traumatic event. They relive it, in a sense. 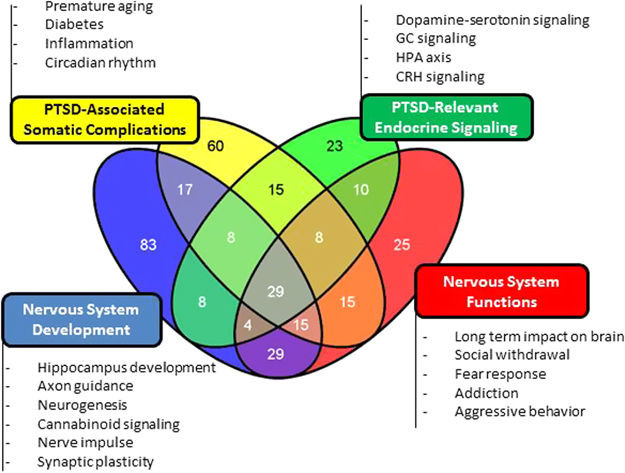 Symptoms may be mild or severe — people may become easily irritated or have violent outbursts. In severe cases victims may have trouble working or socialising. Symptoms can include: 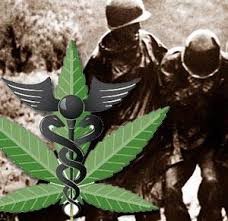 Ample anecdotal evidence suggests cannabis enhances ability to cope with PTSD. Many combat veterans suffering from PTSD rely on cannabis to control their anger, nightmares and even violent rage. Recent research sheds light on how cannabis may work in this regard. Neuronal and molecular mechanisms underlying fearful memories are often studied in animals by using “fear conditioning”. A neutral or conditioned stimulus, which is typically a tone or a light, is paired with an aversive (unconditioned) stimulus, typically a small electric shock to the foot. After the two stimuli are paired a few times, the conditioned stimulus alone evokes the stereotypical features of the fearful response to the unconditioned stimulus, including changes in heart rate and blood pressure and freezing of ongoing movements. Repeated presentation of the conditioned stimulus alone leads to extinction of the fearful response as the animal learns that it need no longer fear a shock from the tone or light.

Emotions and memory formation are regulated by the limbic system, which includes the hypothalamus, the hippocampus, the amygdala, and several other structures in the brain that are particularly rich in CB1 receptors. The amygdala, a small, almond-shaped region lying below the cerebrum, is crucial in acquiring and, possibly, storing the memory of conditioned fear. It is thought that at the cellular and molecular level, learned behaviour —including fear— involves neurons in the baso-lateral part of the amygdala, and changes in the strength of their connection with other neurons (“synaptic plasticity”). CB1 receptors are among the most abundant neuroreceptors in the central nervous system. They are found in high levels in the cerebellum and basal ganglia, as well as the limbic system. The classical behavioural effects of exogenous cannabinoids such as sedation and memory changes have been correlated with the presence of CB1 receptors in the limbic system and striatum. 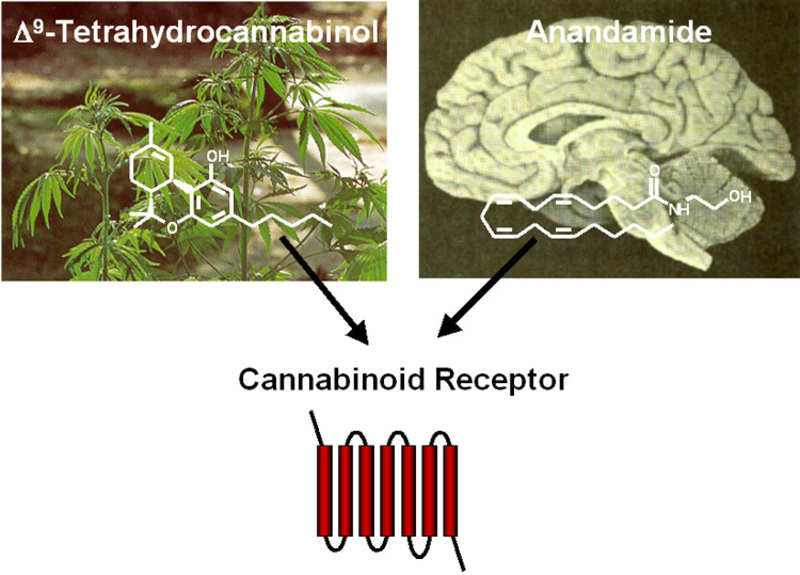 In 2003 Giovanni Marsicano of the Max Planck Institute of Psychiatry in Munich and his co-workers showed mice lacking normal CB1 readily learn to fear the shock-related sound, but in contrast to animals with intact CB1, they fail to lose their fear of the sound when it stops being coupled with the shock. The results indicate that endocannabinoids are important in extinguishing the bad feelings and pain triggered by reminders of past experiences. The discoveries raise the possibility that abnormally low levels of cannabinoid receptors or the faulty release of endogenous cannabinoids are involved in post-traumatic stress syndrome, phobias and certain forms of chronic pain. This suggestion is supported by our observation that many people smoke cannabis to decrease anxiety and many veterans employ cannabis to decrease PTSD symptoms.

Many whom use cannabis medicinally are aware of a signalling system within the body that their doctors learned nothing about in medical school: the endocannabinoid system (ECS). As Nicoll and Alger wrote in “The Brain’s Own Marijuana” (Scientific American, December 2004):

“Researchers have exposed an entirely new signalling system in the brain: a way that nerve cells communicate that no one anticipated even 15 years ago. Fully understanding this signalling system could have far-reaching implications. The details appear to hold a key to devising treatments for anxiety, pain, nausea, obesity, brain injury and many other medical problems”.

As a clinician, Dr Bearman finds the concept of retrograde signalling extremely useful. It helps explain why so many people with PTSD get relief from cannabis. Clinicians are taught in medical school that 70% of the brain is there to turn off the other 30%. Basically our brain is designed to modulate and limit both internal and external sensory input.  The neurotransmitter dopamine is one of the brain’s off switches. The ECS is known to play a role in increasing the availability of dopamine. Dr Bearman hypothesises that it does this by freeing up dopamine that has been bound to a transporter, thus leaving dopamine free to act by retrograde inhibition. 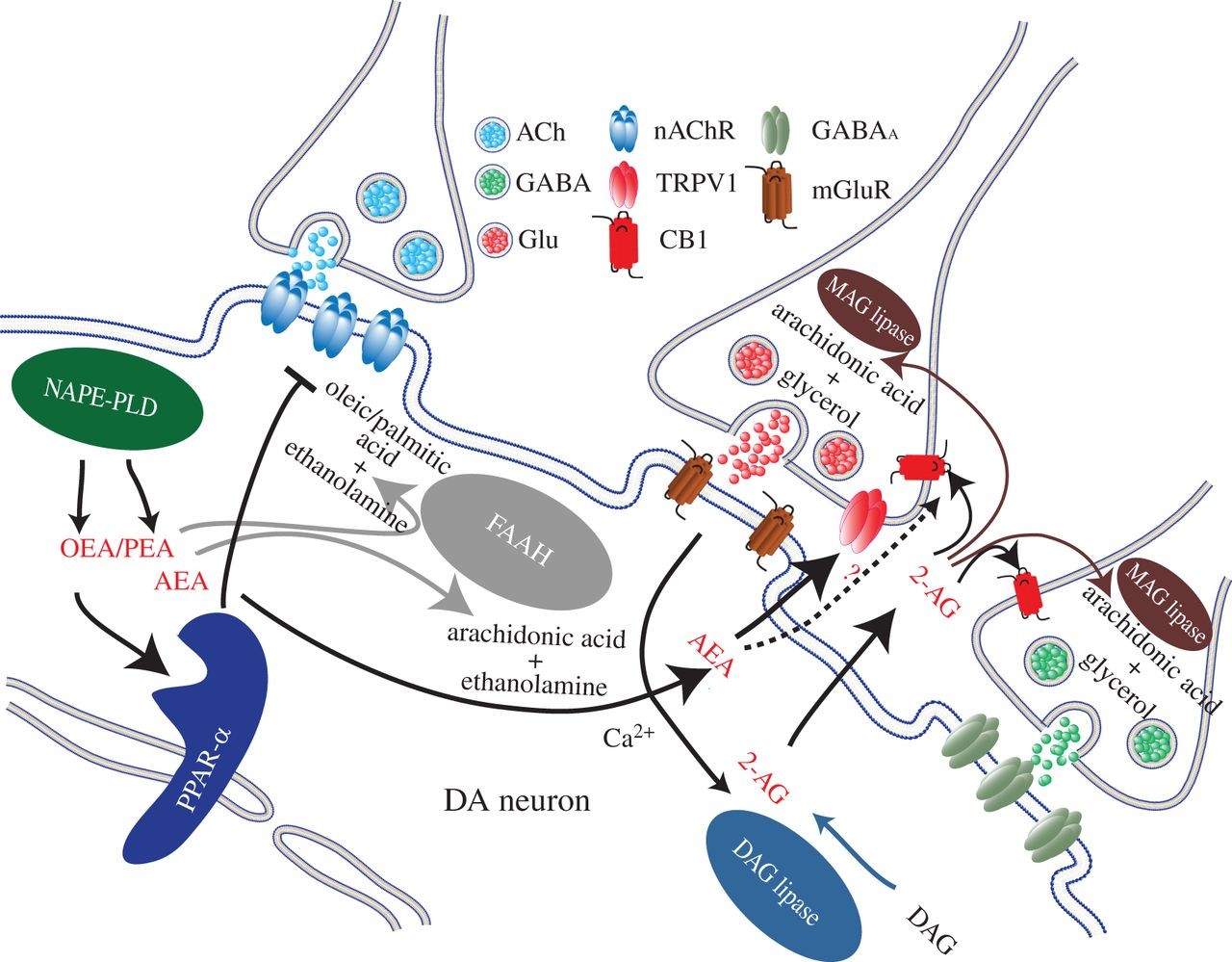 By release of dopamine from a dopamine transporter, cannabis can decrease the sensory input stimulation to the limbic system and it can decrease the impact of over-stimulation of the amygdala. Dr Bearman postulates that exposure to the PTSD-inducing trauma causes an increase in production of dopamine transporter. The dopamine transporter ties up much of the free dopamine. With the brain having lower-than-normal free dopamine levels, there are too many neural channels open, the mid-brain is overwhelmed with stimuli and so too is the cerebral cortex. Hard-pressed to react to this stimuli overload in a rational manner, a person responds with anger, rage, sadness and/or fear. With the use of cannabis or an increase in the natural cannabinoids (anandamide and 2-AG), there is competition with dopamine for binding with the dopamine transporter and the cannabinoids win, making a more normal level of free dopamine available to act as a retrograde inhibitor.

This leads to increased inhibition of neural input and decreased negative stimuli to the midbrain and the cerebral cortex. Since the cerebral cortex is no longer overrun with stimuli from the midbrain, the cerebral cortex can assign a more rational meaning and context to the fearful memories. Dr Bearman has numerous patients with PTSD who say “marijuana* saved my life” or “marijuana* allows me to interact with people” or “it controls my anger” or “when I smoke cannabis I almost never have nightmares”. Some say that without cannabis they would kill or maim themselves or others. Dr Bearman has no doubt that cannabis is a uniquely useful treatment. What remains is for the chemists to determine the precise mechanism of action. 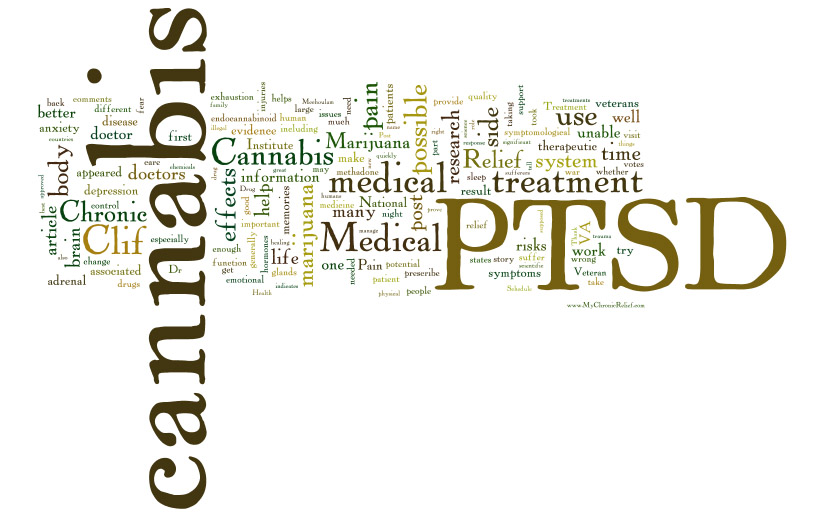 *Cannabis sativa L., is the correct botanical term, marijuana is a North American colloquialism, at best.

One thought on “P.T.S.D. and Cannabis’ Mechanism of Action”