A study from the Salk Institute (California, US) has found cannabinoids can remove the plaque-forming protein associated with Alzheimer’s disease (AD), amyloid beta. Preliminary lab studies by researchers found Tetrahydrocannabinol (THC) reduces beta amyloid proteins in human neurons. Nerve cells altered to produce amyloid beta demonstrated lower levels of the protein when exposed to THC. The inflammatory response from the nerve cells caused by the protein was also eliminated, allowing the nerve cells to survive. The scientists believe this is the first time it has ever been demonstrated. 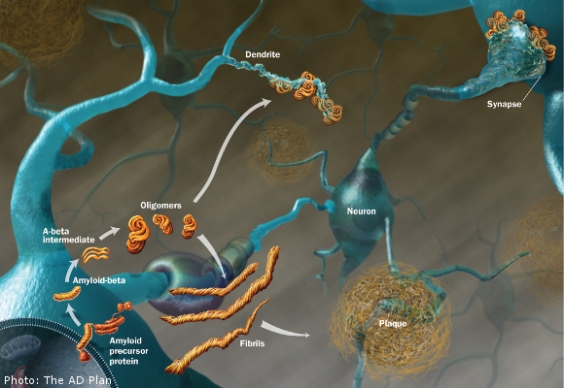 Salk Professor David Schubert, Senior Author of the study published in ‘Aging and Mechanisms of Disease’, said: “Although other studies have offered evidence that cannabinoids might be neuroprotective against the symptoms of Alzheimer’s, we believe our study is the first to demonstrate that cannabinoids affect both inflammation and amyloid beta accumulation in nerve cells”.

Amyloid beta proteins have long been known to accumulate in ageing nerve cells within some brains before the onset of plaques and then Alzheimer’s symptoms. AD is a progressive brain disorder that leads to memory loss and can seriously impair a person’s ability to carry out daily tasks. It affects more than five million Americans according to the National Institutes of Health and is a leading cause of death. It is also the most common cause of dementia and its incidence is expected to triple in the US over the next 50 years. In Australia (2016), more than 353,800 live with dementia and that number is expected to increase to 400,000 in less than five years. It has long been known that amyloid beta accumulates within the nerve cells of the ageing brain well before the appearance of AD symptoms and plaques. Amyloid beta is a major component of the plaque deposits that are a hallmark of the disease. But the precise role of amyloid beta and the plaques it forms in the disease process remains unclear.

Brain cells contain receptors that can be activated by endocannabinoids, a class of lipid molecules made by the body, used for inter-cellular signalling in the brain. The psychoactive effects of Cannabis are caused mostly by THC (a phytocannabinoid), a molecule structurally similar to endocannabinoids and one which can activate the same receptors. Physical activity also produces these molecules, with some studies showing exercise may slow the progression of Alzheimer’s. Endocannabinoids can be produced in response to stress and in rodent AD models, cannabinoids reduce amyloid beta accumulation and improve memory.

Antonio Currais (first author) said: “Inflammation within the brain is a major component of the damage associated with Alzheimer’s disease, but it has always been assumed that this response was coming from immune-like cells in the brain, not the nerve cells themselves. When we were able to identify the molecular basis of the inflammatory response to amyloid beta, it became clear THC-like compounds that the nerve cells make themselves may be involved in protecting the cells from dying”.

Schubert emphasised his team’s findings were conducted in exploratory laboratory models and the use of THC-like compounds as a therapy would need to be tested in clinical trials. In separate but related research, his lab found an Alzheimer’s drug candidate that also removes amyloid beta from nerve cells and reduces the inflammatory response in both nerve cells and the brain. It was this study that led the scientists to discover endocannabinoids are involved in the removal of amyloid beta and the reduction of inflammation.

Abstract – The beta amyloid (Aβ) and other aggregating proteins in the brain increase with age and are frequently found within neurons. The mechanistic relationship between intracellular amyloid, aging and neurodegeneration is not, however, well understood. We use a proteotoxicity model based upon the inducible expression of Aβ in a human central nervous system nerve cell line to characterise a distinct form of nerve cell death caused by intracellular Aβ. It is shown that intracellular Aβ initiates a toxic inflammatory response leading to the cell’s demise. Aβ induces the expression of multiple proinflammatory genes and an increase in both arachidonic acid (AA) and eicosanoids, including prostaglandins that are neuroprotective and leukotrienes that potentiate death. Cannabinoids such as THC stimulate the removal of intraneuronal Aβ, block the inflammatory response and are protective. Altogether these data show that there is a complex and likely autocatalytic inflammatory response within nerve cells caused by the accumulation of intracellular Aβ and that this early form of proteotoxicity can be blocked by the activation of cannabinoid receptors.

(Proteotoxicity is any impairment of cell function caused by protein/s)

Nerve cell death from the accumulation of aggregated or amyloid-like proteins is a common theme in most age-dependent neurodegenerative diseases. However, there are no drugs that significantly inhibit cell death associated with Alzheimer’s disease (AD), Parkinson’s or Huntington’s diseases. This could be because most interest has been in the late manifestations, not initial changes, in cell metabolism that ultimately lead to nerve cell death. In the context of lifespan, slowing down removal of aggregated proteins in the brains of flies shortens lifespan, while expediting rate of removal extends lifespan. Therefore, it is likely the accumulation of intracellular aggregated protein in the brain occurs throughout life, contributes to cognitive ageing and may also be involved in the initiation of many old-age-associated diseases. Although debated, the accumulation of intracellular Aβ is an early event in AD. In both humans and rodents, intracellular Aβ accumulation is observed well before extracellular amyloid. Similarly, both aggregated huntingtin (also called the HTT or HD [Huntington’s disease] gene) and alpha synuclein (abundant protein in the brain) are found in neurons before disease onset. As with the accumulation of intracellular proteins, central nervous system (CNS) inflammation is elevated with age and increases in disease. As AD is associated with neuronal dysfunction, the researchers hypothesised that proteotoxicity in nerve cells themselves may initiate an inflammatory response that can lead directly to their death and contribute to overall inflammation in the CNS.

In summary, the accumulation of intraneuronal Aβ and inflammation precede plaque formation and nerve cell death in AD. It is shown that intracellular Aβ activates a broad spectrum of inflammatory signalling pathways. There is clearly a dynamic interplay between these pathways that may lead to either cell survival or death. Cell death can only be completely prevented by 5-LOX inhibitors (arachidonate 5-lipoxygenase inhibitors are compounds that slow/stop action of arachidonate 5-lipoxygenase [5-lipoxygenase or 5-LOX] enzyme, responsible for production of inflammatory leukotrienes), cannabinoids and caspase (cysteine-aspartic proteases, -aspartases or -dependent aspartate-directed proteases; protease enzymes playing essential roles in programmed cell death [apoptosis, pyroptosis and necroptosis] and inflammation) inhibitors.

However, once the cell death process is underway, death can be reduced by some prostaglandins (any of a group of cyclic fatty acids with varying hormone-like effects). Conversely, once initiated, cell death is increased by arachidonic acid (AA) and linoleic acid (LA) both polyunsaturated omega-6 fatty acids, some leukotrienes (any of a group of compounds, originally isolated from leucocytes, metabolites of AA), CB1 and CB2 inhibitors and cytokines (small secreted proteins released by cells that have a specific effect on interactions and communications between cells) that enhance proinflammatory pathways. In addition to prostaglandins and leukotrienes, AA is a component of a very large family of endocannabinoids that are, in turn, metabolised to AA. The EC arachidonoyl ethanol amide (AEA) is expressed in the brain.

The major cannabinoid receptors are CB1 and CB2, and AEA activates both. Data show AEA promotes MC65 (human CNS nerve cell line that contains the C-99 fragment of the amyloid precursor protein) cell survival and blocks intracellular Aβ accumulation. UBR597, an inhibitor of the enzyme that degrades AEA, is also protective as is the CB2 agonist Q-3. Despite complexities, the data strongly suggest early intervention via the reduction of intraneuronal Aβ proteotoxicity may reduce AD disease initiation or progression. Conversely, toxicity and Aβ accumulation are enhanced by CB1 and CB2 antagonists AM281, AM251 and AM630. A number of additional CB1 and CB2 agonists or antagonists were assayed, but no pharmacological distinction between CB1 and CB2 could be made. Of the compounds tested, THC is the most potent CB-1 agonist. THC is protective, removes intraneuronal Aβ and completely eliminates elevated eicosanoid (any of a class of compounds [as the prostaglandins, leukotrienes] derived from polyunsaturated fatty acids [as arachidonic acid] and involved in cellular activity) production in induced MC65 cells.